One of the many wonderful things my parents have been able to enjoy in their life is the opportunity to have lived in the South Pacific for several years in Guam.

While there, my Uncle (dad) Jerry (i can explain later..) was able to experience a trip to Iwo Jima with several men who fought there.  They told him stories of how they saw so many young soldiers sacrifice their lives for this great country on that island.  He recently emailed me with the message below ..and I am posting it with his permission. .

"When I was in Guam (2002) I was privileged to take part in flying a military 'tour' group to Iwo Jima as part of a yearly reunion type thing. We flew around the island one direction, then back the other way before landing (so the vets(age 75 +) could see from their side of the plane) for a day's tour and activities. Many were still nervous about returning here. 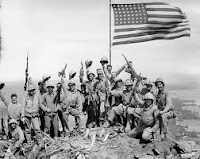 Each year there were fewer veterans around that made the trip. The year I flew the group up we had about 20 or so guys that had been there those many years ago. Many had their wives with them. And many had never mentioned the mental anguish they had acquired there. When we landed there was a 'huge' group of young marines there lined up to honor these vets when they came off the plane.

The young marines were from Japan, Okinawa, and Pendleton that were there on maneuvers and were there also to learn of past history and glory and of respect that was won by these men. We went around the island (very small, 2 miles by 5 miles...1/3 the size of Manhattan Island), and went up on Mt Suribachi and gazed down on those black beaches where so many lost their lives. Many of these old Marines would stand there looking out over this very small island and tears would just flow down their cheeks with their wives standing right beside them, not having realized for all those years that something would affect their husbands quite like that. They just had never talked about it.

On this island in only 36 days there were 25,851 Marine casualties of which 6,821 died. Nanc and I ate dinner the night before with some of these men and one told us he was 16 when he landed on Iwo Jima. There were 150 guys in his company when they hit the beach and 2 days later he was one of 3 left! They then selected him to be part of a burial detail and they just collected bodies on the beach for the next couple of weeks. There were about 21,000 Japanese deaths here. By taking this island 24,751 Army Air Corps crewmen were saved from ditching in the cold waters of the north Pacific on their way back from Japanese bombing raids initiated from Tinian and Guam.

I have some of the sand from those beaches today here in my office. When you see someone disrespecting the US Flag....well, they need to be very careful where they do it! Needless to say it was a very solemn day and very awe inspiring. It is a national shrine for the Japanese. They lost many more and they are mostly still there. I wish everyone could take that tour and spend a day there...sorry I got to going so long here, but when you see that flag being raised on Suribachi...well, I was right there...it is and was something....jer

Here are some of the best WWII pictures I have seen. Don't know where they came from.

Be patient, the picture interface is a little testy but very interesting content."

Good stuff.. Thanks for sharing Jerry!
Posted by Jay Emory at 7:50 AM

Jay Emory
I am a HUSBAND, FATHER and BANKER by vocation in central OKLAHOMA and have a passion to live a life that glorifies the Creator. Frankly, sometimes I struggle with it. And then there's that thing I have with ketchup..